Alexa to respond without stopping the conversation

I have a use case where Alexa reads out a number of items (Tokyo, Paris, LA, Phoenix, Seattle, Washington, Ontario, Paris). While Alexa is reading out the cities, the user calls out a city. Alexa gives some information about the called city and continues reading out the rest of the cities.

Problem I am facing is that - if I use a “capture” block or “intent” block, Alexa stops reading and waits for the user input. Is there a way I can avoid Alexa stopping the conversation. Meaning - I don’t want Alexa to “wait” for a user input. But if input is given, it should process it.

I understand that capture block halts for an user input. But was assuming that an intent block is a “perpetual listener” and do the trick.

could you give us dialog sample you expect?

The skill is called “bingo City”.

Here is the screenshot of the conversation.

Hope I have explained it adequately. 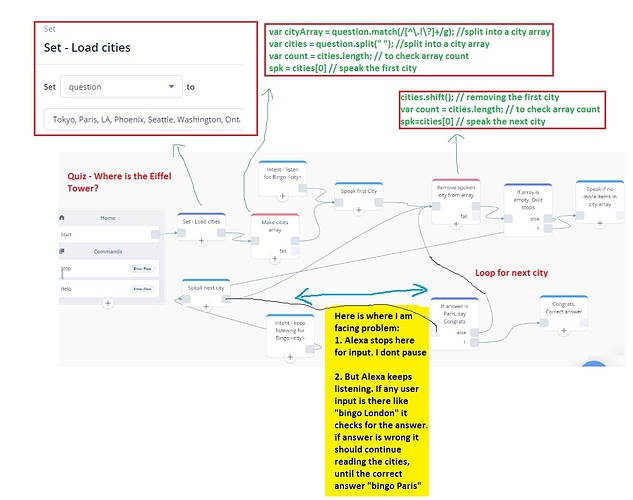 Thanks! I think I kind of got it. However this is very difficult to explain. I am trying anyway.

Anyway, in your use case, the point is getting where user interupts. this might be tricky but you should use some kind of time-based logic, I think. I’ve not tried but something like this.

But for me, this is very complicated. I think Alexa is not good at this type of skill which requires the right timing to invoke…