Hi there,
I have a voiceflow with german text. Unfortunately the Action Console speaks with an english voice (and heavy english accent), although I think I have set the language to german everywhere…(Voiceflow, my Google account and of course in the Action Console). What could be the reason? Thanks for your help

This is something you can set during the first step of the creation of the project on the GOogle Action console. If you’re not to familiar with the Google Action Console or Dialogflow, the easiest way to get Google speak in the locale you want is to test it on a real device linked to your dev account,

FYI, these are my Japanese settings, which works. 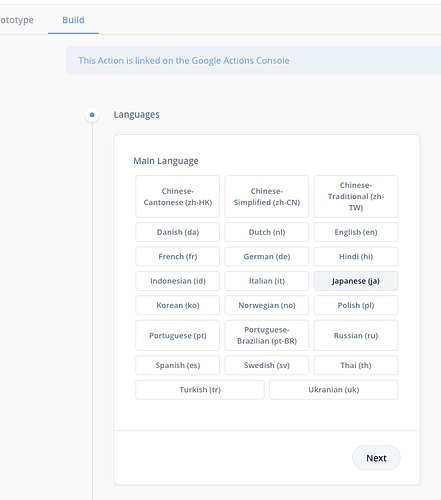 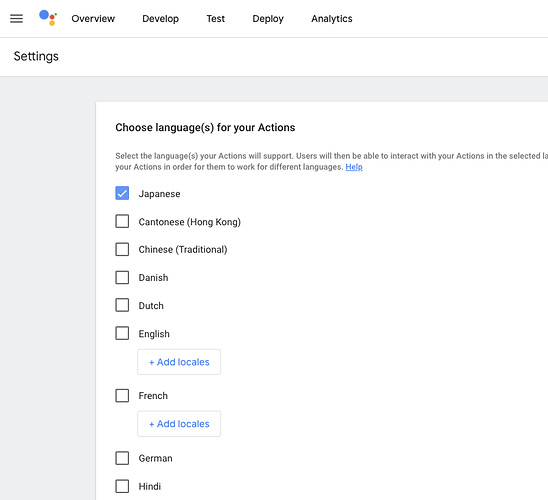 Thank you guys for the profound help!
@Kun432 strangely I have all these settings right, but still I have the problem. I was hoping I was just overseeing one setting to do… I guess I retest it with a new test-project. Wish me luck!

Hey, it’s me again… I set up a new test project to make sure I set up ALL the settings to german. But still my device (also set to german) is talking the german text with english intonation. Anyone has an idea, where the problem might be?

Hello,
i have same issue. Did someone found a solution?

are you using current integration with Dialogflow or new google integretion with Actions Builder?

if you use new one, it’s a bug and I’ve already reported it.

@kun432
thanks for the info
I have published it over cerator.actions.voice…

Thats bad, is there a workaround or something else to solve that?

This is just a workaround only for testing. 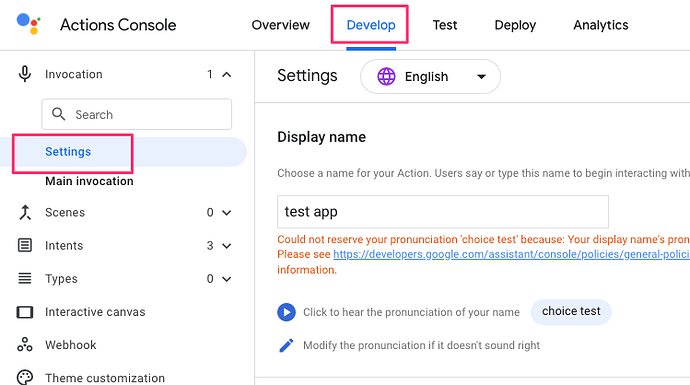 You will see voice name changing to voice name with locale string. Maybe in your case, it should be “DE-DE”. 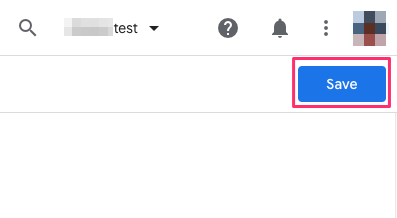 Now you can test with German voice.

However, after uploading from Voiceflow, it should turn back… So, basically, we should wait for voiceflow to fix this bug.

Also, in my end, I cannot upload from Voiceflow currently and it should be another bug. Remember that new google integration is a very new feature and still in progress. you may see other bugs, If you find bugs, you can report a bug from Intercom. That will improve Voiceflow! 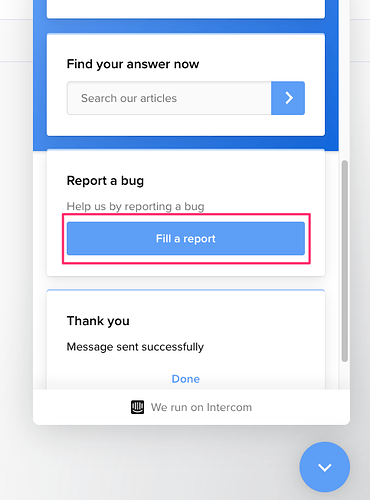 @kun432 thats great it works on this way. Thanks a lot!
Thats enough to test and to present it to my client in german…cause the eng versin was a no go
hopefully voiceflow will fix this asap

another qustions
Do you know why google always starts the test version on my devices where i am logged in with the google account?

Generally, there are 2 versions in Google Actions:

After published in Actions store, that message will gone for who enable your Action.

One more thing for developer. As developer, when adding new features but don’t wanna break productionn version, right? In that case, develop and test new features for test version, then published it as a new production version. Developer can change version in test settings.

This is a sample for my published action. (This is an old action and not developed by Voiceflow, it might be different.) 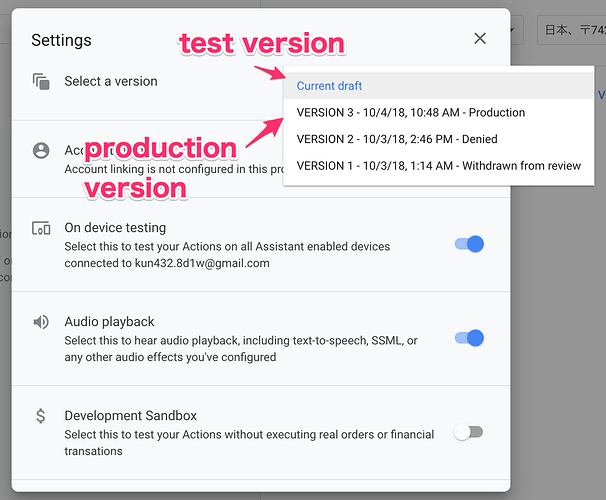 I just make a new release withe new language setting to get the german version. hope this will work fine…

Thanks for your help!

now it has been fixed!