I need to help, please. Linking end of command to the main flow (home)

So I have a randomiser, with multiple options. I want to create a command that will say NEXT any time that there is a result that is being played. So I though to create a command, but how can I link to go back to the randomiser (it is an independent flow the next command)?

Is there an easier way?. 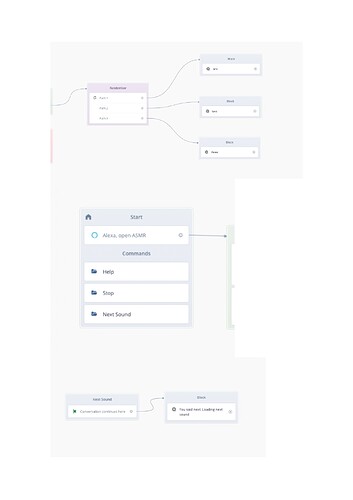 For getting “Next” anytime, there are 2 ways to do it: Command or Intent Block.

Command will always go back to WHERE user say “Alexa, Next” and cannot link back to the block you want. Intent Block will get user utterances GLOBALY and you can link to the block which you want.

The difference between Command and Intent Block, this may help you. (No.2 and 3)

6 Ways to Build Context into your Conversation Designs | Voiceflow

Hey Kun, this is great but I want the random block to play all of the audio files (without duplicates), and the say, will you like to play it again? BUT I want to be able to say NEXT at any point when any audio is playing, NOT to have to say next everytime one is played.

Can you help me with this?

Audio using Speak Block is maily not for playing Audio. It’s just adding sound effects with speech. So, an user interaction is required between each audio, I think.

In that case, you should use Stream Block. Stream Block is for playing audio and has built-in “Next” feature. My sample. 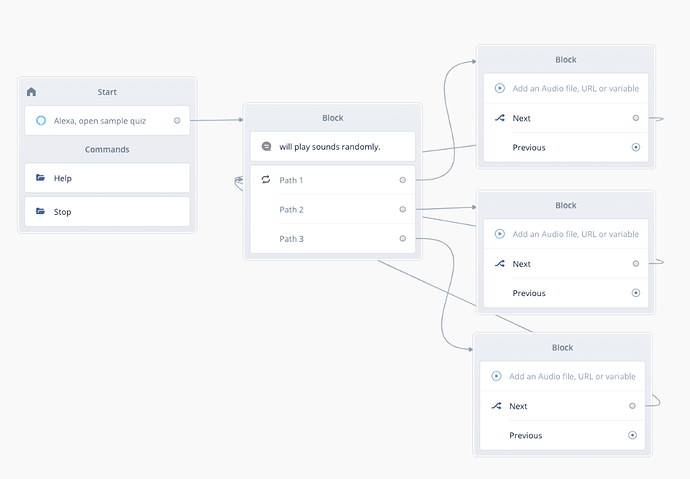 What does “implemented” mean here? Do you mean that the Next or Previous step must link to another step (at the least)? Thanks.

If any of these intents do not apply to your skill, handle it in a graceful way in your code. For instance, you could return a response with text-to-speech indicating that the command is not relevant to the skill. The specific message depends on the skill and whether the intent is one that might make sense at some point, for example:

That means need to put speak block after next/previous and say something like mentioned above, and go back to stream block. I have no experiences with certification for audioplayer skill, but I’ve heard certification might be failed without this “implement”.