i have to play 5 mp3 files one by one.
i am using stream block and once the first mp3 file played and after it played it does not auto play the next file. i need to say “play next song”.

any way for auto play one by one mp3 files.

In my end, I created a demo of loop playback with 3 songs and works. (each speak block works only when invoke “Next” or “Previous”, although) 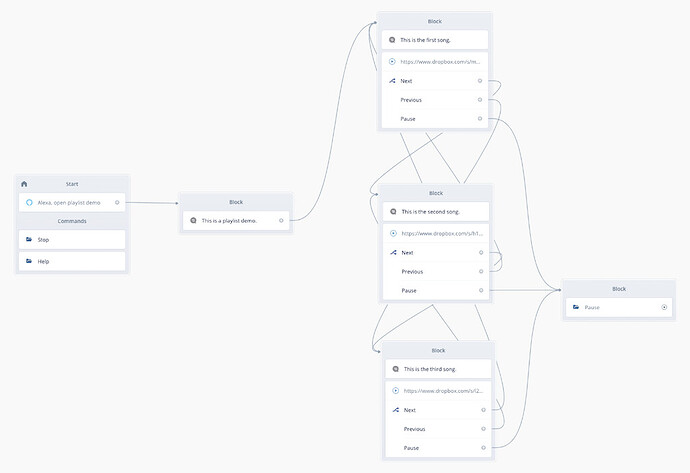 To clarify, for streaming audio block, there is no way to move automaticallly to the next block after audio playing without saying something like “Alexa, next”? I just want it to move on without me saying anything, no wake word, no command, nothing.

FYI: (1) during voiceflow native prototyping testing, it advances automatically without me saying anything; (2a) during my echo device testing, it does NOT advance without my saying “Alexa, Next”; (2b) this aligns with the pop-up explanation inside your stream block

there is a way to play some songs automatically without any speech. This is a simpler sample than previous one and works in my end with my Echo Dot and Echo Show. 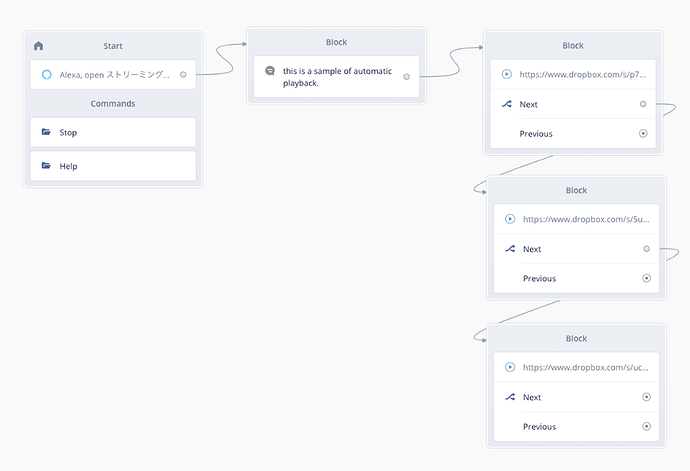 Thanks, but that doesn’t quite speak to my question. To clarify, can you have an audio stream go automatically to a non-audio stream step (e.g. Flow or a SSML step), that is, without any wake word + command?

ah I see your point.

no. this is Alexa’s limitation. Stream block uses Alexa’s feature called AudioPlayer. AudioPlayer is like:

for more conversational, use speak block with audio, which uses SSML audio inside, although it has own limitations:

Thanks for your answer on this. I saw your previous post too with the SSML vs Audio Player post linked.