Reprompt works in Voiceflow but not Google Action Console

I have a speak block followed by a choice block containing two paths: continue and exit. I also enabled the “else” to reprompt. It works fine in Voiceflow.

However, in the Google Action test console, the Action speaks the speak block AND the reprompt. This means it doesn’t give the user the opportunity to answer continue or exit. Any tips on why this is?

seems it is not supported yet because it’s a new feature. try else “path” as current workaround.

For some reason it always selects “else” in if condition

I tried my simple test and reprompt for else works now. can you try again? 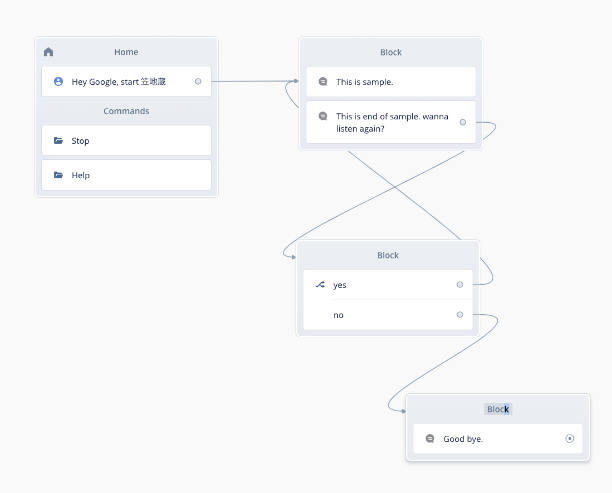 BTW, I found else does not work after stream block. In Alexa, playing longer audio with stream block might be different from simple audio in Speak block. I’m not sure about this is same as Google.

@kun432 Yes, this plays after a stream block. However, no matter what I do, the path goes to “else.” For example, if I do “reprompt,” it doesn’t give the user an opportunity to answer. If I have a “path” that doesn’t go to anything, the session immediately ends. If the “path” speaks the reprompt and goes back to the block (the same as a “reprompt” but more explicit), then it does the same thing as the first case.

What are your suggestions?

@kun432 Does this mean I can’t have any speak blocks after a stream block in Google?

BTW this prototype works perfectly fine in the Voiceflow test. I’m testing in the Google Action simulator and it doesn’t work. It was working last week but now it is not. Is there a Voiceflow bug going on?

Hi, sorry for check late. I checked google’s document, tested my sample with stream block, examined GCP’s log in deep and found something like a clue why choice doesn’t work after stream block. but I don’t know much in detail about Google’s mediaplayer behaviours, and also am not sure if this is a bug or Google’s right behaviour, so I reported this in detail to Voiceflow.

also, I don’t have much experiences with Google, but

Anyway, I will post here if there are any further info although I cannot promise to solve this soon, sorry…